By Men’s Room for WCMF.com

Joe Perry called in, and when he does, he always has a lot to say. Of course I had to ask him about his 2 Grammy performances, his collaboration with Pitbull, the passing of Lemmy, the history of the original Hollywood Vampires, working with Johnny Depp, and taking the band on tour. But, we also talked about Brian Johnson recent announcement about his hearing, and how Joe protects his, after decades of live perfomances, the passing of George Martin, and obviously I had to ask about the state of Aerosmith and his ongoing relationship with Steven Tyler. I think I may have woken him up, he sounded kind of sleepy!

It’s an honor to be asked to perform at the Grammys, but to hit the stage twice means that you’re definitely doing something right. Such was the case with Aerosmith’s Joe Perry.

Perry first appeared playing guitar next to Johnny Depp, Alice Cooper, and Duff McKagan as part of Hollywood Vampires, in a medley that also included a tribute to the late Lemmy Kilmister of Motorhead.

The guitarist appeared later in the show as well, joining Pitbull, blink-182 drummer Travis Barker, and Robin Thicke for Pitbull’s songs “El Taxi” and “Bad Man.” It was a true change of pace from “Walk This Way,” but Perry was able to get some riffs in the mix.

Among the performers to take the stage were Pitbull, Robin Thicke, and Travis Barker, who united to perfect their planned collaboration.

Upon announcing the number, CBS and the Recording Academy teased that “special guests” would join the aforementioned three names on stage.

While not officially announced on any Grammys press material, word had already emerged that Joe Perry is one of those special guests. Perry accordingly joined Pitbull, Thicke, and Barker at a recent rehearsal.

Even Johnny Depp, who has created many odd visions over the years, believes that people tuning into the Grammy Awards on Monday night will be struck by a highly unusual sight.
Depp himself with an electric guitar, taking the stage with rock legends Alice Cooper and Joe Perry.

Do not adjust the television, folks. This is the rock supergroup, The Hollywood Vampires.  END_OF_DOCUMENT_TOKEN_TO_BE_REPLACED

Hollywood Vampires, the hard-rock supergroup featuring Alice Cooper, Aerosmith’s Joe Perry and actor Johnny Depp, have confirmed their first U.S. concert of the year, a headlining performance at the 2016 Rock Fest in Cadott, Wisconsin. The festival is scheduled for July 14-16, although the exact date of Hollywood Vampires’ performance hasn’t been revealed yet.

Other artists on the bill include Alice in Chains, Slipknot, Marilyn Manson, Queensryche, Scott Stapp, Five Finger Death Punch, Breaking Benjamin, Kix, Skillet and Bullet for My Valentine, among many others. Visit Rock-Fest.com for the full lineup and ticket info.

Meanwhile, Hollywood Vampires have revealed official details about the deluxe digital version of their 2015 self-titled debut album that will be released on Friday, February 12. The expanded collection will feature three bonus tracks — covers of The Who’s “I’m a Boy” and Love’s “7 and 7 Is,” and the original song “Bad as I Am,” which was co-written by The deluxe version includes the scorching new single “Bad As I Am” an original song penned by Depp, Cooper guitarist Tommy Henriksen and Johnny’s longtime collaborator Bruce Witkin.

As previously reported, the Hollywood Vampires album was an all-star project Cooper co-organized as a tribute to various now-dead rock stars who he used to drink with in Los Angeles early in his career. The record is made up mostly of classic cover tunes and features contributions from a jaw-dropping lineup of musicians that, in addition to Cooper, Perry and Depp, include Paul McCartney, AC/DC’s Brian Johnson, Joe Walsh, Slash, The Doors’ Robby Krieger, Dave Grohl and Perry Farrell.

The event will take place at the Staples Center, Los Angeles, on February 15. And the band featuring Alice Cooper, Joe Perry and Johnny Depp, say they’ll perform a Motorhead track in honour of the late rock icon, who died on December 28 aged 70.

Cooper tells Rolling Stone: “We started this band as a means to toast our ‘dead drunk friends’ at the Rainbow, all the ghosts in the bar, and now I guess Lemmy is involved in that, too.

“He was one of those salt-of-the-earth guys. Find me somebody who didn’t love Lemmy. He’s just one of those guys that’s impossible not to like.”

The band have yet to decide what Motorhead track to play on the night, but Cooper says Ace Of Spades could be in the running – although he’s unsure if he’d copy Lemmy’s distinctive vocals.

Cooper adds: “I might do it more Alice Cooper style, but it would still have to have that growl – that guttural voice to make it work. I can’t picture Creedence Clearwater doing that song.”

Hollywood Vampires will also perform Bad As I Am at the bash – a bonus track which features on the deluxe edition on their 2015 self-titled debut. It’s out on February 12 and is available for pre-order.

Cooper will head out on a tour with his solo band for a run of dates across North America in April and May. END_OF_DOCUMENT_TOKEN_TO_BE_REPLACED 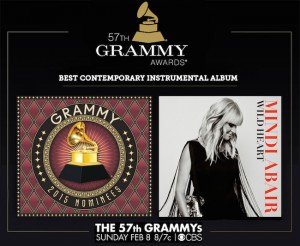 “So excited for Mindi Abair and her Grammy nomination for Wild Heart. I am very honored to be a part of the record. The whole CD is amazing. Although Jazz is not his usual go to for listening to for music after hearing Mindi play, it will make a convert out you. I am extremly thrilled for Mindi’s well deserved success”. -Joe Perry

Here is the link to the song ‘Kick Ass’ which Joe plays on. https://soundcloud.com/concordmusicgroup/mindi-abair-kick-ass-featuring

Here is a link to the whole CD: https://soundcloud.com/concordmusicgroup/sets/mindi-abair-wild-heart-full-1/s-ncaQ5

More info on Mindi can be found here: http://www.mindiabair.com/