Joe Perry knows all the moves. Here he gets feedback by angling his tiger-finish signature model Gibson Les Paul at a monitor. It’s a cool technique for making a 6-string howl without standing in front of an amp cranked up to 10.

It’s not every day you get to speak with a bona fide rock ’n’ roll legend—especially one with an encyclopedic knowledge of tone, gear, and the mechanics of groove—but we interviewed Joe Perry and, man, he delivered in spades.

END_OF_DOCUMENT_TOKEN_TO_BE_REPLACED

The project pairs musicians with visual artists to create one-of-a-kind Les Pauls that will be auctioned later this year.

The project in partnership with the Gibson Foundation recruited 20 musicians and 20 visual artists to create axes that are as much art pieces as musical instruments. Each Les Paul will be auctioned through Julien’s Auctions in October with all proceeds benefiting VH1 Save The Music Foundation in its mission to expand public access to music education for children.

“It’s incredibly important to keep music in the schools as well as all the arts,” said Perry in a statement. “Kids need to be exposed to music as early as possible. As in all the arts it creates an outlet for their creativity. Having Music in school helped me find my calling.”  END_OF_DOCUMENT_TOKEN_TO_BE_REPLACED

Joe Perry is an old-school Beatles/Stones-style rock ‘n’ roll guitarist with a loose improvisational style based around major/minor pentatonic and Mixolydian scales.

He once said that he “doesn’t want to play in an Aerosmith tribute band”, alluding to his freestyle, no-rules approach, and how he rarely plays a song the same way twice. He even switches between guitars and different amp and effect combinations depending on his mood on the night.

Joe’s rhythm style includes open chords ornamented with hammer-ons and pull-offs, as heard in the memorable Livin’ On The Edge intro riff, while his minor pentatonic/blues scale riffing adds the all important grease and sleaze to tracks such as Love In An Elevator and the drop D-tuned Just Push Play.

Perry also reveals his country influences on tracks like Hangman Jury, where he plays skilful slide licks on a lap steel guitar. The following examples give you a taste of Perry’s trademark riffing style, his country-influenced slide lines and a classic pentatonic rock lead lick. END_OF_DOCUMENT_TOKEN_TO_BE_REPLACED 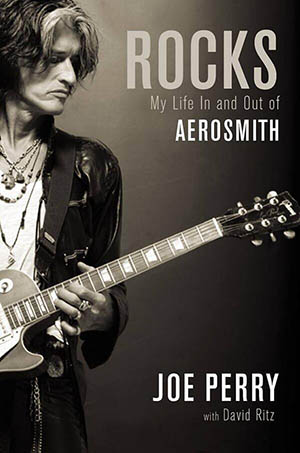 Perry recently made headlines for something other than his music: a new book. ROCKS: My Life In and Out of Aerosmith tells his life story and the ups and downs of rocking with one of the biggest bands in the world. In the following quotes, Perry talks about his new book and the first moment he heard a guitar sing. END_OF_DOCUMENT_TOKEN_TO_BE_REPLACED

Get your questions for me ready because in about 30 mins (6:00pm EST) I will be doing a LIVE @reddit_AMA #RedditAMA pic.twitter.com/SBtRipNCgs

What are Joe’s favorite Led Zeppelin songs?  Disney ride?  Modern band? What kind of songs he wants to bring to the setlist on the new tour and what can make him embarrassed on stage? Joe discussed his Lake Sunapee memories and future plans for the Hollywood Vampires with his fans  on Reddit Q&A session: END_OF_DOCUMENT_TOKEN_TO_BE_REPLACED

Aerosmith guitar hero Joe Perry had a busy 2014, touring with the band, recording a Christmas EP and releasing an autobiography,Rocks: My Life In and Out of Aerosmith, that made The New York Times best-seller list.This year promises to be another sprint for the 64-year-old Gibson Les Paul playing legend, with an Aerosmith tour slated for summer and more. Although Perry had a plethora of guitars, including the 1959 ‘Burst once also owned by Slash that Gibson recreated in 2013 as the Joe Perry 1959 Les Paul, we recently asked him if there’s a Holy Grail instrument that’s eluded his grasp. His reply: a 1968 Gibson Les Paul Goldtop, like the one he owned when Aerosmith recorded their 1973 debut album Aerosmith, featuring their breakthrough hit “Dream On.” Take it away Joe: END_OF_DOCUMENT_TOKEN_TO_BE_REPLACED

He wanted to be a marine biologist, like his hero Jacques Cousteau, but got sidetracked playing guitar. That was good for us, and it didn’t turn out too bad for Joe Perry either. At this point, it’s been 40-plus years of kick-ass music with “America’s Greatest Rock and Roll Band,” as Aerosmith has been called, and with his occasional forays down the solo path.

How can you quantify the impact Perry has had on the rock guitar world? Aerosmith has sold more than 150 million albums worldwide – more than 70 million in the U.S. alone. Is there anyone out there who hasn’t heard or learned to play Joe’s iconic riff in “Walk This Way” yet? Well, maybe Kanye West’s fans, but not too many others.

The Rock and Roll Hall of Famer made the rounds recently to promote his new autobiography, “Rocks: My Life In and Out of Aerosmith,” which surprises with its honesty, and its insight into the mind of both the young Joe Perry – the potential scientist – and the Joe Perry of today – the family man who has somewhat quietly been married to the same pretty girl for 30 years.

Oh, and of course there’s all the classic stories about the making of some of rock’s most revered albums, and the open discussion about the decades of craziness that have been his life on tour as one-half of the “Toxic Twins,” as he and partner-in-crime Steven Tyler were often referred. Certainly there’s no shortage of sex and drugs to go with the rock and roll in Perry’s excellent memoir.

When his publicist contacted me to set up the interview, I was told I had 20 minutes, and was given a list of “talking points,” all of which centered around a section of the book. But when Perry called at the end of what had already been a long day of interviews, he sounded relaxed, and when the conversation turned to guitars, he was in no hurry to end the call.

In our hour-plus conversation we talked about everything from how his bandmates responded to his book, to his early love of the water, to his relationships with Jeff Beck and Jimmy Page. But Joe really opened up when the discussion turned to effects pedals – he loves to check out new pedals and is on an endless search – and guitars new and old, including plenty of boutique dealers and lesser-known brands that are among his favorites.

And when we hit on amps and mics and live sound and recording techniques, Perry was eager to share, full of details, and seemed to really be in his element. Here’s how our conversation went: END_OF_DOCUMENT_TOKEN_TO_BE_REPLACED

Rocks: My Life In And Out Of Aerosmith offers a no-nonsense look at the rollercoaster ride of his band’s 45-year history. And after surviving the press blitz for Rocks, Perry is more than happy to oblige when we ask to dig into his love of guitars… END_OF_DOCUMENT_TOKEN_TO_BE_REPLACED

Joe Perry just added “author” to his ever-expanding list of artistic endeavors. The co-founder of Aerosmith, and the lead guitarist of his own solo project, decided that it was time to finally share his side of the story. The esteemed guitarist has gone through a variety of record labels, management deals, and turmoil with his four founding bandmates — he even left Aerosmith for a stint in the late ‘70s to pursue his own band, the Joe Perry Project. Despite the ups and downs, Perry has made a lucrative career doing what he loves — playing guitar and creating music. Armed with a lifetime of knowledge about the ins-and-outs of the music industry, the rocker has recently churned out a rock and roll autobiography with the help of David Ritz titled Rocks: My Life In and Out of Aerosmith.

GRAMMY Pro caught up with Perry to chat about his recently released New York Times bestselling book in which he tackles themes such as bad management deals (the band fired their manager of 12 years, Tim Collins, in 1996) and shares insight into how Aerosmith has managed to stay together all these years. Perry also told us about his creative process in the studio and why he sets aside time to write music every single day, whether he’s working on a new album or not. END_OF_DOCUMENT_TOKEN_TO_BE_REPLACED