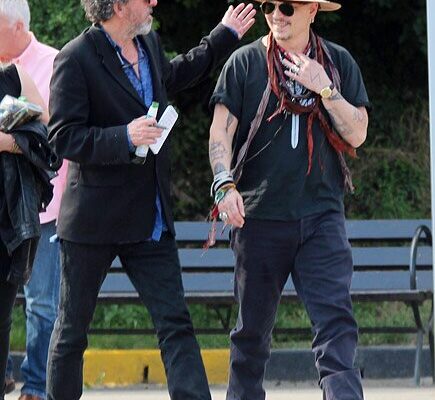 Johnny Depp continued his Romanian travels on Saturday, traveling with his band Hollywood Vampires to visit the home of the first vampire: Dracula.

Depp, Alice Cooper and Joe Perry made a trip to Bran Castle, located in the Carpathian Mountains on the border of Transylvania – about 150 miles north of Bucharest. They were joined by Depp’s friend and frequent collaborator, Tim Burton.

The castle is known worldwide as “Dracula’s Castle” after being the only castle that fits the description of the home of the popular vampire in Bram Stoker’s 1897 Gothic horror novel.

It is more precisely the believed home of Vlad Tepes, the inspiration for the character. Vlad was depicted by some historians of that time as “Vlad the Impaler” – a blood-thirsty ruthless despot with murderous political aspirations.

The castle is now a museum – the first private museum of the country. Depp and his bandmates posed for a photo in front of the castle, shared on the band’s official Instagram account. Depp also got in a playful mood at one point, pretending to bite a production assistant.

The Hollywood Vampires are currently on the final leg of their European tour, which concludes in Bucharest on Monday. They previously visited Sweden and Denmark.

Depp is in the midst of an ugly divorce from estranged wife Amber Heard after the 30-year-old actress revealed domestic violence allegations against her husband of 15 months in court filings on March 27 and on Friday.

On Thursday, the actor and musician appeared to be in good spirits, dining at an Italian restaurant in the Herastrau Park district of Bucharest, alongside Romanian actors, athletes, and models.

One model, Alexandra Enachescu, even snapped a picture with Depp, sharing it on her Instagram page. She captioned the photo with a quote by Depp’s Pirates of the Caribbean character Captain Jack Sparrow: “Life’s pretty good, and why wouldn’t it be? I’m a pirate after all.”

“The concerts and the tour are good for him,” a source close to Depp recently told PEOPLE. “He doesn’t want to let his fans down. It’s the best distraction.”

By Peter Mikelbank for People