Video: Legendary guitarist Joe Perry of Aerosmith sat down with The K-EARTH 101 Morning Show in studio to talk about his incredible life and career in music, which is detailed at length in his new tell-all book Rocks: My Life In and Out Of Aerosmith.

Part one: Joe talks about his new book, the first time he met Steven Tyler and the thing that made him decide to start a band with him.

“His drumming, I have to say…he’s a drummer. I mean he plays piano, he plays guitar a little bit – enough to make it sound okay – but his real thing is drums,” Joe says of Steven. “That’s how we used to write songs together – he’d play drums and I play guitar.”

He also explains the ups and downs the band experienced in the past and how his relationship with Tyler is today, plus his family life and how he came up with the riff to “Walk This Way.”

Part two: Joe talks about Aerosmith’s longtime sex symbol status, balancing raising a family while touring, and shares some stories from his book, including the craziest thing a fan has ever done at a show.

“There’s one that stands out…once and a while you’ll get a sneaker up on stage or a bra…this guy was like waving this prosthetic leg into the air and it got chucked up on the stage, and of course there was a moment,” Joe laughed. “After the show, the guy came back asking for it. It was his way to get back and meet the band.”

Joe also talks about how he felt when Steven Tyler joined American Idol, saying he was “pissed off” about the way he heard about it because “I didn’t hear it from him,” plus recalls recording one of their biggest hits “Don’t Wanna Miss A Thing.”

ROCKS: My Life In and Out of Aerosmith is in book stores now and online at Barnes & Noble or Amazon.com. 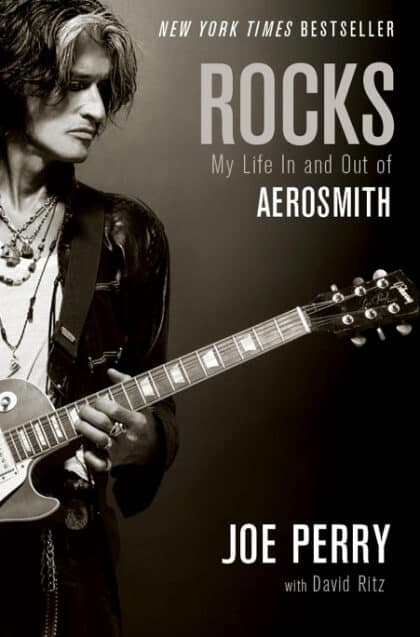