AEROSMITH’S JOE PERRY – “ONCE YOU TAKE THE DRUGS AWAY, TWO THINGS HAPPEN…”

Often called “America’s greatest rock ‘n’ roll band,” Aerosmith have certainly defended that reputation on live stages the world over for years. But on record as of late? Not so much. It’s a topic that’s broached in Joe Perry’s expansive, candid and wildly entertaining new autobiography Rocks, and it’s a topic talked about in BraveWords’ chat with the axe legend, which you will see—eyebrows raised—as you read on.

“There’s probably four different levels of what I wanted to get across,” begins Mr. Perry—as cohort Steven Tyler is wont to call him as Joe falls into one of his always novel yet deftly rooted guitar solos—on the purpose of his elegant new book. “One was, first, I wanted it to be a piece of literature, that people could read and be entertained by. You know, I’ve heard people say about certain books, it was great to read the book, but it felt like I was reading a journal. So I wanted it to come across as being, really, my words but a piece of literature. Then again, that’s more of a technical thing.”

“I think what you’re asking more about is, I wanted people to know just about how hard it is to be a band together for 42 years, with all the ups and downs that people have seen in the press and what went on behind the scenes, I know there’s been a lot made of the drugs and all that stuff, and the Toxic Twins. And frankly, that… We were never named the Toxic Twins until after we were cleaned-up, in the ‘80s. It’s kind of funny. But it’s about what it takes to keep it together. And especially when some of our arguably most successful years, to the public, were some of the most tumultuous years, namely when we were sober—when people’s personalities really get a chance to come through.” “You know, there’s the old thing like, everybody’s all fucked-up on drugs and they fight and they don’t talk, and they don’t deal with their problems,” explains Joe. “So once you take the drugs away, two things happen. You learn that you can write songs without being fucked-up, you know, without having to make time for hangovers every day. But also the real personalities show through, and you have to learn how to deal with that. And that was what I think was kept from the public, in the second half of the band’s career, the late ‘80s, the ‘90s, and into the 2000s.”

“It’s been really tough to keep it together,” continues Joe, indeed touching upon one of the cooler dimensions of the book, the subtext being how complicated everything gets when you are this big a band—and you throw wives and girlfriends into the cauldron. “And I want people to see that. And also I wanted people to see that the problems that we face aren’t much different than the problems almost everybody faces with their families, with their brothers or brothers and sisters. I mean, I’ve talked to guys that have said, ‘I haven’t talked to my brother in ten years.’ Well, you don’t have that option when you’re in a band. You learn how to work with them, and you know, there’s that dream and that magic that happens, that if you’ve got a band that works, you do anything it takes to keep it together. There are bands that don’t talk to each other when they’re offstage, but they know the value of what they’ve achieved, and then they figure out a way to make it work. And, you know, it’s hard work. It’s emotional.”

“And they don’t want people to see that. And I was hoping that people would get something like that from the book, but they didn’t necessarily have to be an Aerosmith fan or rock ‘n’ roll fans. But it’s not a self-help book, by any means—it’s an autobiography of my life. And that’s one more thing: how the hell did a guy who grew up with no music around him, in a small town, with a whole different vision of my own way that I wanted to go, get kind of sideswiped by this beautiful insane thing called rock ‘n’ roll that captured me, and has still got me by the throat, and it won’t let go? And so there’s a few things—that’s why it took two years to write.” One of the recurring and visceral themes within Rocks is Joe’s contentious relationship with Steven Tyler through the years, very much—and in myriad ways—shared by the liked of Jagger and Richards. I asked Joe, keeping it about the music, what sorts of songs each of these two alpha-writers would turn in that might set the other guy off.

“Well, probably the perfect example to that answer is the last record,” begins Perry, referring to the ill-received Music From Another Dimension!, which held much promise given boastful talk of heaviness in the (ominously too many) years leading up to its crafting and release. “We went into that record with Jack Douglas, basically trying to set the same kind of vibe that we did for say Toys In The Attic. You know, everybody gets to throw in an idea or two, and if it makes the cut, it goes on the record. And I kinda had this feeling like, I don’t know when we’re going to cut another record. The way the music business is, who knows if there’s going to be albums in two years, three years? So I had this feeling like, just put it out there. If Tom has a song, do it. If Brad has a song, do it. And Steven and I have a song, do it. Just put it out there.” And I know I got a lot of complaints, ‘Oh, there’s too many songs on the record.’”

“And, well, the business being what it is,” continues Joe, “you know, Steven wanted to have these four ballads on the record. And the band, having a reputation of getting on the radio with the ballads, mostly, that’s what the record company did. They put out the ballads. They came and went. We let Steven have his way. In fact, we used a different producer for those songs. So… and I think the album kind of speaks for itself, in answer to that question. I mean, just looks at the songs that my name is under, and you’ll see kind of where I go (laughs). And look at the ones named to Steven.” “Especially the songs that I wrote myself. You know, I wrote a couple of songs on there that only were put on as like a special added track for Britain, or whatever. There’s a song, ‘Oasis In The Night,’ which is a ballad. I can’t believe that I’m actually writing ballads now. Or a song called ‘Something,’ with Steven playing drums. That’s the kind of stuff that comes from me. And that song, Brad wrote, ‘Street Jesus.’ I mean, if that doesn’t show the heart and soul of Aerosmith, I don’t know what does. But then when you listen to those ballads, you kind of go, uh, okay, the guy’s got a great voice, but you know, what’s it really do? I mean, is this something we’re really gonna play live? I don’t know. It’s just kind of a drag that the whole ballad thing… I think we might’ve got more mileage if we would’ve put out a couple of those rock songs first, personally.”

But it’s not just the ballads. Weirdly, talk always comes around to this aggravating topic any time I get to interview an Aerosmith guy, but yeah, it’s also all those layers and layers of production isn’t it? Fact is, there’s only one song on Music From Another Dimension! that is recorded rock ‘n’ roll (“Out Go The Lights”) and it sticks out like a… thumbs up.

“God, I don’t know,” sighs Joe, who… it seems he gets it but can’t do anything about it. “Again, it’s democracy. When you’re in the studio with five guys, everybody’s got a different take on what it should sound like. A certain part works or it doesn’t work, or it’s a mistake, or it actually adds something to the song. It’s always been kind of a battleground. Steven is a perfectionist, and he wants to fill in every hole, every spot, everything, and I sit there next to him and try to steer it back towards the roots. But that’s also been the thing of… it’s a partnership when we’re writing, and when it’s working, it’s the magic that it is. Unfortunately, it’s kind of like I said in the book, there are a few elements, basic elements, that are missing from that partnership. In order to have a partnership, you gotta have some trust. And that kind of went by the wayside. But when it’s working, it’s definitely a give-and-take that makes it Aerosmith.”

By Martin Popoff for BraveWords 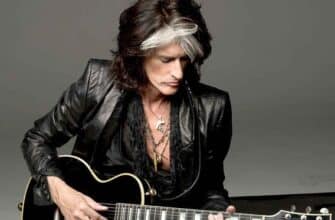